"Man's greatest longing is for freedom. Man is a longing for freedom. Freedom is the very essential core of human consciousness: love is its circumference and freedom is its center. These two fulfilled, life has no regret. And they both are fulfilled together, never separately.

"People have tried to fulfill love without freedom. Then love brings more and more misery, more and more bondage. Then love is not what one has expected it to be, it turns out just the opposite. It shatters all hopes, it destroys all expectations and life becomes a wasteland: a groping in darkness and never finding the door.

“Freedom can be of three types, and those three types have to be understood well. The first is freedom from, the second is freedom for, and the third is just freedom – neither from nor for. The first, freedom from, is a reaction. It is past-oriented; you are fighting against the past, you want to get rid of it, you are obsessed with it.

“The second idea is freedom for; it is future-oriented. The first is political, the second is more poetic, visionary, utopian. Many people have tried that too, but that too is not possible, because future-oriented you can’t live in the present – and you have to live in the present. You don’t live in the past, you don’t live in the future, you have to live in the present.
“The first, freedom from, is a reaction. The second, freedom for, is revolution. The third, just freedom, is rebellion. It is present-oriented. The first is political, the second is poetic, the third is mystic, religious.
“What do I mean when I say just freedom? Neither for nor against, no past, no future, just being herenow, just living moment to moment with no ideology, with no utopia.
“The real sannyasin, the real mystic, is not against the past, is not for the future. He is so utterly absorbed by the present that he has no time, no energy, for the past and the future. This is how the rebel is born.

“The rebel is the most beautiful phenomenon in the world. Buddha is a rebel, so is Jesus; Atisha is a rebel, so is Kabir. These are rebels. You will misunderstand them if you think of them as if they were revolutionaries; they were not. Neither were they reactionaries. Their orientation is totally different, their orientation is now, here. They don’t live for any ideal, and they don’t live against any ideal. They don’t have any ideas; no ideology exists in their consciousness.
“The sheer purity of this moment – they live it, they enjoy it, they sing it, they dance it. And when the next moment comes, they live the next moment with the same joy, with the same cheerfulness. They move moment to moment, they don’t plan ahead.” 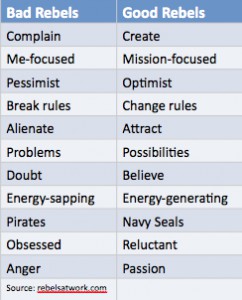