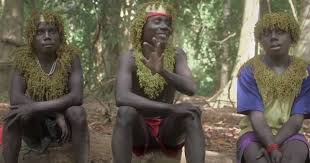 is a global outreach campaign that aims to introduce you to one of the most ancient people in the world, the Jarawa.
​
They live on the Andaman Islands in India. They are the first indigenous asians people. They came from Africa 70,000 years ago. They had lived in complete isolation for 50,000 years. Today, they are only 480 left of them, and they are in great danger. They Indian government assimilates them by force. The Jarawas are treated like animals in zoo by tourists and Indian scientists want to give them bananas to "educate" them.
​
The JARAWA CAMPAIGN is the only campaign that focuses only on the Jarawa people to make a real impact. Because the Jarawas have talked with us and we have recorded their message that we relay worldwide to spread their call for self-determination. The Indian government is fully aware of the campaign and they have threatened us many times.

"The Jarawa, the most ancient people in the world, is being endangered by your government's policies. Whereas the Jarawa told us that they do not wish to join the Indian community and that they want to continue to live far from our world, you are denying them the right to choose their own future by pushing them to assimilate.

As citizens from around the world, we request that you close the Andaman Trunk Road that cuts through their forest, fight effectively against the poachers who continue to plunder their game and regularly report on the situation of the Jarawa and the consequences of your actions for them. We request that you provide all the necessary guarantees so that the Jarawa may continue to live as they wish."