Earliest Depiction of a Witch on a Broomstick 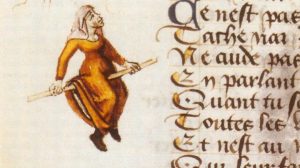 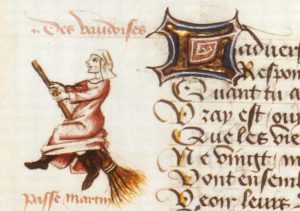 A witch riding a broom from Le Champion des Dames by Martin Le Franc. c. 1440
This colourful illustration is the earliest know depiction of a witch riding a broomstick. It is taken from an enormous, 24,000 verse, poem known as ‘Le Champion des Dames‘ (The Champion of Ladies), which was composed by Martin Le Franc sometime between AD 1440 and 1442. This rambling text extols the virtues of women, while also condemning heresy and witchcraft (it dedicates just over 800 lines to the later). Amongst the many images used in the poem are two depictions of witches, one riding a broom and the other a white stick.  In the text the witches are referred to as Vaudois, or Waldensians, a Christian sect which was deemed heretical by the Pope.
Gepost door gaialogie op 06:38