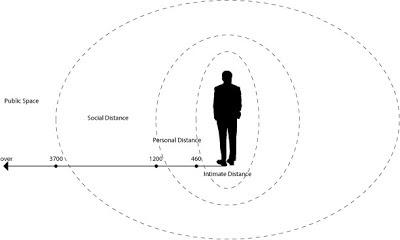 “Personal space” of  “peripersonal space” wordt door de neurowetenschapperneuroscientist Michael Graziano,  Princeton University, beschreven in zijn nieuwste boek The Spaces Between Us.
“The brain computes a buffer zone around the body. We have this “second skin” hardwired into our DNA. 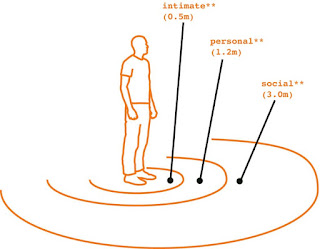 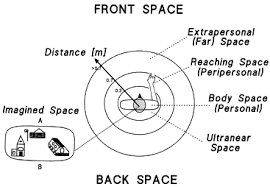 "The invisible second skin is primarily protection. It has a huge range of functions. It can be as basic as protecting you against an actual physical threat, like a predator. It was first studied in the 1950s with animals that had a personal space or “flight zone” around them, which they compute to protect themselves from predators.
It can also protect us in the simplest way from the objects all around us in everyday life, like walking through a doorway without bashing your shoulder on it. We don’t even think about it because we have this system that’s unconsciously monitoring where things are and adjusting our movements. In humans and other animals, it also has this huge social component to maintain a buffer between one individual and another.
The idea that a dominant individual has the larger personal space is probably a mistake. President Kennedy’s 30-foot rule showed up in a book in the 1960s about personal space by Edward Hall. Hall described how President Kennedy was always surrounded by floods of people but there was always a bubble around him of about 30 feet and only a very few people were allowed into that bubble. But this was probably not his personal space but rather the 30-foot nervous, personal space of all the people who were near him. They kept that distance from him.
Trump is very grabby and handsy in general.   When you see him with dignitaries, he’s very comfortable reaching out, grabbing people’s hands, putting his arm around them. This is a guy whose defensive bubble is very small. He’s not intimidated by other people.
That’s classic. The idea that higher status or alpha males have a larger personal space is not true. It’s that everyone else has a larger space with respect to that person and therefore clears the space around that person.
One of the most practical uses of peripersonal space is that we wrap, or extend, that defensive margin of safety from our peripersonal radar system around extended objects sticking out of our hands. If you use a fork to put food into your mouth, you need a sense of the space around the fork so that you don’t hit or stab things.
Of all facial expressions, the smile is the most thoroughly studied. But humans are not the only ones who smile; it’s widespread in the primate world. This is a nonaggressive behavior, a sign of nonaggression. The upper lip pulls up, the eyes squint, the head ducks, the torso hunches. It’s a whole set of defensive behaviors.
Crying and laughter are similar. It can even be possible to confuse them. Laughter seems, in its most primitive form, to be part of play fighting. When you tickle children, they laugh. It’s part of a play fight. But a play fight is still a fight. You’re still impinging on someone’s peripersonal space. The natural reaction is the defensive set: lips up, squinting eyes, even tears coming out, protective of the eyes, and so on. All these are natural reactions during any fight or any situation where something is impinging on your peripersonal space.

My son has dyspraxia, which is surprisingly common. About one in 20 children have it. It’s an inability to move in a fully coordinated way with respect to your environment. Some people have described it as knowing what you want to do but having difficulty getting it out in a coordinated way.
There are lots of flavors of dyspraxia but, in my son’s case, it seemed more to have to do with his personal space—understanding objects in the space immediately around the body and how to interact with them. He had a host of difficulties. He tended to bump into things. It was hard for him to learn how to hold a pencil.
It was shocking to us, how much of our ordinary everyday life is built out of personal space. When you don’t have a clear sense of the space around you, it isn’t just that you bump into things, or have trouble learning tool use. You have trouble learning math because you can’t point accurately. The first lesson you learn in school is to point and count for math. You also can’t read well because you have trouble understanding where the book is—where the words are—in relationship to you.
But the social impact was most shocking to us. He would lean and bump against people, stand too close, or barge through, squeezing between people where there wasn’t a space. All the things that, at some unconscious level, bother people socially. People are very attuned to this special social dance. When that goes wrong, people don’t know why, they just don’t like it.
His whole social world came crashing down. His school didn’t know what was wrong but they didn’t like it and expelled him from school. He was six at the time, in first grade, and they thought he was sexually assaulting the other students! Of course, he had no idea what he was doing. We had expert after expert saying, “He needs physical therapy, he doesn’t understand the space around his body.”
We went through a whole court case on that. It taught me that this is probably way more common than we think. Personal space is so under the surface, it’s so unconscious most of the time we don’t notice it. But, boy, when it goes wrong, you notice!
“Don’t invade my personal space” and “respect my boundaries” are phrases we hear a lot today.
No! I think we’re in danger of the opposite! The mechanism of personal space, and the deep discomfort of having that invaded, has been there since before we were human. But today we increasingly live in cyberspace, which has no physical, personal dimension to it. I suspect this is one of the reasons why we have increasing difficulties with social interaction. It’s so much easier online—when you’re not in or near someone’s personal space—to fire off insults or to be incredibly undiplomatic or destructive."