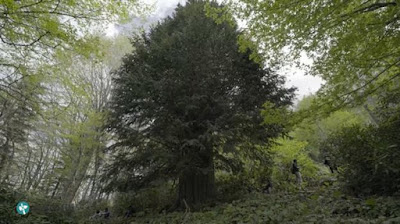 Who would have guessed, but to this day Turkey, the area once inhabited by the Hittites, and known as Old Anatolia, has some of the oldest yews on earth, some of which are survivors from the days of the ancient civilization of the Hittites. Unlike the yews in Britain’s churchyards, which become hollow after 800 years or so, with a more favourable climate, many of these Turkish yews are dateable through their ring counts which give immense ages of over 4,000 years. Yews are known to become dormant at times and so these yew trees could be even older. In 2016 a 4,112 year old yew tree dating back to the Bronze Age was found flourishing in Turkey at Gumeli, in the northern province of Zonguldak, making it the oldest yew tree known in Anatolia and one of the five oldest trees in the world. It was declared a national monument. The yew was found by Zonguldak Provincial Director of Nature Conservation and National Parks Sezgin Örmeci, who said local people informed them of the tree, prompting scientific examinations. Ercan Oktan from Karadeniz Technical University’s Faculty of Forestry and Murat Yıldız from Anturia Consulting determined the tree to be 4,112 years old after examining its rings in a laboratory. A 2,700 year old Yew Tree, again dated by its ring count, located in Andirin town of Kahramanmaras province and found in 2018 is the second oldest living tree in Turkey. Unlike our British yews these yews have the utmost protection. Isn’t it time ours did?
Janis Fry
Llandybïe, WLS, United Kingdom
MAR 2, 2020 —
Bronnen: https://www.change.org/p/save-britain-s-ancient-yew-trees-before-we-lose-any-more/u/25830398?cs_tk=AoWVaU7_BpaNBMUXYV4AAXicyyvNyQEABF8BvAH4o5L2QWRHH3zPXdxqQIg%3D&utm_campaign=98ddd89ccad54c4cb24252bf9a5c7e15&utm_content=promoted_petitions_v0_0_1&utm_medium=email&utm_source=petition_update&utm_term=cs
https://www.hurriyetdailynews.com/oldest-yew-tree-found-in-turkeys-north-100428