Human activity risks contaminating pristine water stockpiled deep underground since the age of the mammoths, said a study Tuesday that warns of a looming threat to a critical life source.

So-called "fossil" groundwater—more than 12,000 years old—trickled into sub-surface aquifers long before it could be tarnished by pollution from farming and factory chemicals.
Generally stored at depths of more than 250 metres (820 feet) under the Earth's surface, the ancient resource had been assumed to be shielded from pollution by humans—who rely on it more and more as shallower sources dry up.
Now, researchers have found traces of modern-era rainwater in wells that bring "fossil" groundwater to the surface—pointing to a contamination risk.
"It's a bit like going to an old folks' home and suddenly realising there are also little kids running around. That's great, except if the little kids have the flu," said study co-author James Kirchner of the Swiss Federal Institute of Technology in Zurich.
The fear, he explained, is that younger water may pollute the ancient aquifers with fertilisers, pesticides or industrial runoff from Earth's surface—though they have not found any evidence for this yet.
Groundwater is rain or melted ice that filters through Earth's rocky layers to pool in aquifers—a process that can take thousands, even millions, of years.
It is the largest store of unfrozen fresh water on Earth.
Groundwater is pumped to the surface with wells for drinking and irrigation, and supplies about a third of human water needs.

Thinking long-term
For the latest study, presented at a European Geosciences Union meeting in Vienna, a research team set out to determine how old Earth's groundwater really is.
They used radiocarbon and tritium content to distinguish old from young groundwater and determine their relative abundance. 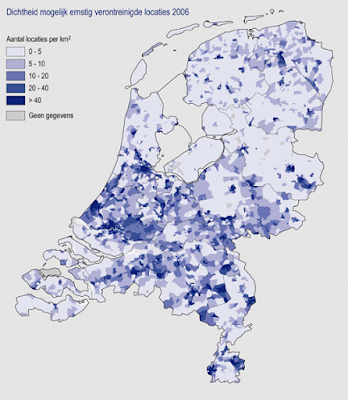 New groundwater has more tritium, a short-lived isotope of hydrogen, as it was more recently exposed to Earth's atmosphere and surface, tainted by nuclear tests since about the 1950s.
Radiocarbon, on the other hand, takes almost 6,000 years to decay. It is therefore much less abundant in fossil water.
The data showed that "most of the groundwater under our feet is surprisingly old," said Kirchner.
Roughly half—potentially more—dates from 12,000 years ago or more.
"The assumption would be if your groundwater comes from a time when mammoths were roaming the Earth, that those mammoths did not have chlorinated hydrocarbons," Kirchner explained.
"If your water dates from a... pre-industrial era, the assumption would be it can't be carrying industrial-era contaminants down underground."
Against expectations, however, the team found that about half of "fossil" groundwater wells they studied contained detectable levels of tritium, indicating the presence of younger water.

"This observation questions the common perception that fossil groundwaters are largely immune to modern contamination," concluded the study, published in the journal Nature Geoscience.
Fellow author Scott Jasechko, of the University of Calgary, said the findings were worrying on two levels.
Not only may "fossil" groundwater be exposed to contamination, it would also take millennia to replenish once used up.
"Conserving groundwater for future generations is important and requires us to consider timespans beyond the typical political or land management timescales of years or decades," he told AFP.
The High Plains aquifer in the United States, for example, would take an estimated 6,000 years to refill, according to the study authors.
And Libya's Nubian aquifer, formed in a geological epoch when the now-dry region was wet and green, is being depleted at a rate of six million cubic metres of water per day."