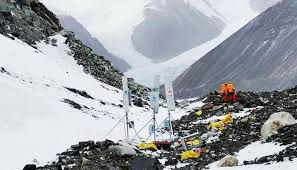 China has installed 5G towers on the world’s highest peak Mount Everest in Tibet. According to the latest updates, the towers providing 5G services have been started since Thursday. This is according to China Mobile Hong Kong and Huawei responsible for the project announced its completion on Facebook.
While China has been facing criticism over its initiative of 5G network across the world, it has been setting such controversial towers everywhere. Recently such a tower has been built at the base camp of the highest peak, Mount Everest in Tibet. The organisers has claimed that it is the highest such tower at 6500 meters above sea level.

The firm that built the towers with the help of yaks said that the towers would help improve communication for “mountaineering friends” for whom it was no longer “a dream to reach 8K live broadcasts with relatives and friends on 5G network”, as published on the social media recently after completion.
Built at an altitude of 6,500 metres, the base station which became operational on Thursday, is located at the advance base camp of Mount Everest, the world’s highest peak, according to state-run telecom giant China Mobile.
Located at the Tibet-Nepal border, Mount Everest called as Quomolangma in Tibetan, has an altitude of more than 8,840 metres. 5G network provider Huawei has been facing criticism from many countries. It has been blamed that China is using the company to spy on the host countries via their 5G equipments. Countries such as the US and UK has banned Huawei.
http://www.tibetanjournal.com/china-installs-5g-towers-on-highest-peak-mt-everest-in-tibet/?fbclid=IwAR0Jp0xEa8Pvc1dxLgLTYAfPU9dKGx-VX6Rtig_M9NBCrXZYSq3bxzk2UOQ